Metal roofing and solar (photovoltaic) PV panels are a winning combination: metal’s strength and durability make it the only type of roofing material able to outlast the 30+ year lifespan of solar PV arrays. Solar modules can produce energy all year long – even in regions with heavy snowfall. But when you’re attaching PV panels to a roof in snow country, be aware snow loads will have an impact on your solar array’s design. Today, we’ll look at important considerations to help your finished PV installation withstand the forces of nature. 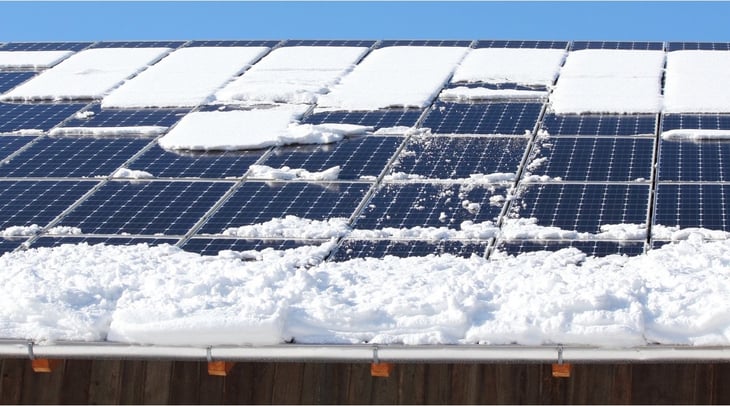 Solar panels can be a slippery surface in snow country.

First, we’ll explore some basics about the science of snow on metal roofing and smart snow retention strategies. Then, we’ll look at how solar panels affect (and are affected by) rooftop snow accumulations.

What Happens When Snow Collects on Your Metal Roof?

If you live in heavy snow country, you’ve probably seen a rooftop avalanche. This event occurs when a snow mass sheds off a metal roof all at once. Snow loads on a roof can vary widely from as low as 20 psf up to 300 psf and even greater. The result is dangerous – and potentially catastrophic – for people, vehicles, landscaping, property and equipment below. 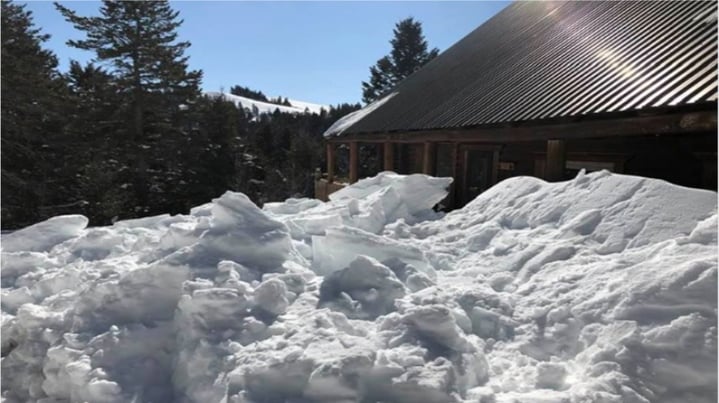 This image shows the aftermath of a rooftop avalanche released from a metal roof.

The conditions for a rooftop avalanche begin when snow accumulates on a roof. Initially, the snow is held in place by a temperature-sensitive (frictional) bond. Compressive forces push down and compact the snow blanket. The vector force (sometimes known as a drag load or gravity load) pushes the snowbank toward the eave, increasing its density. When sunlight warms the metal roof surface through the translucent snow, a melt-water sheet forms beneath the snowbank and creates a slippery condition allowing the snow to slide off the roof.

Interested to see how these forces operate and how snow loads are calculated?

Check out the video later in this blog.

What Holds the Snow Back?

The truth is any rooftop obstruction can create an unintentional snow guard. Obstacles can include items such as: 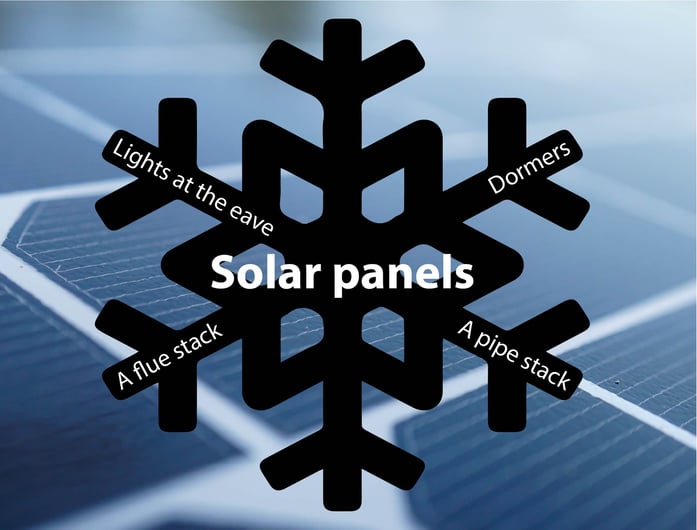 These rooftop obstructions – including your solar panels – can act as an unpredictable snow retention system. 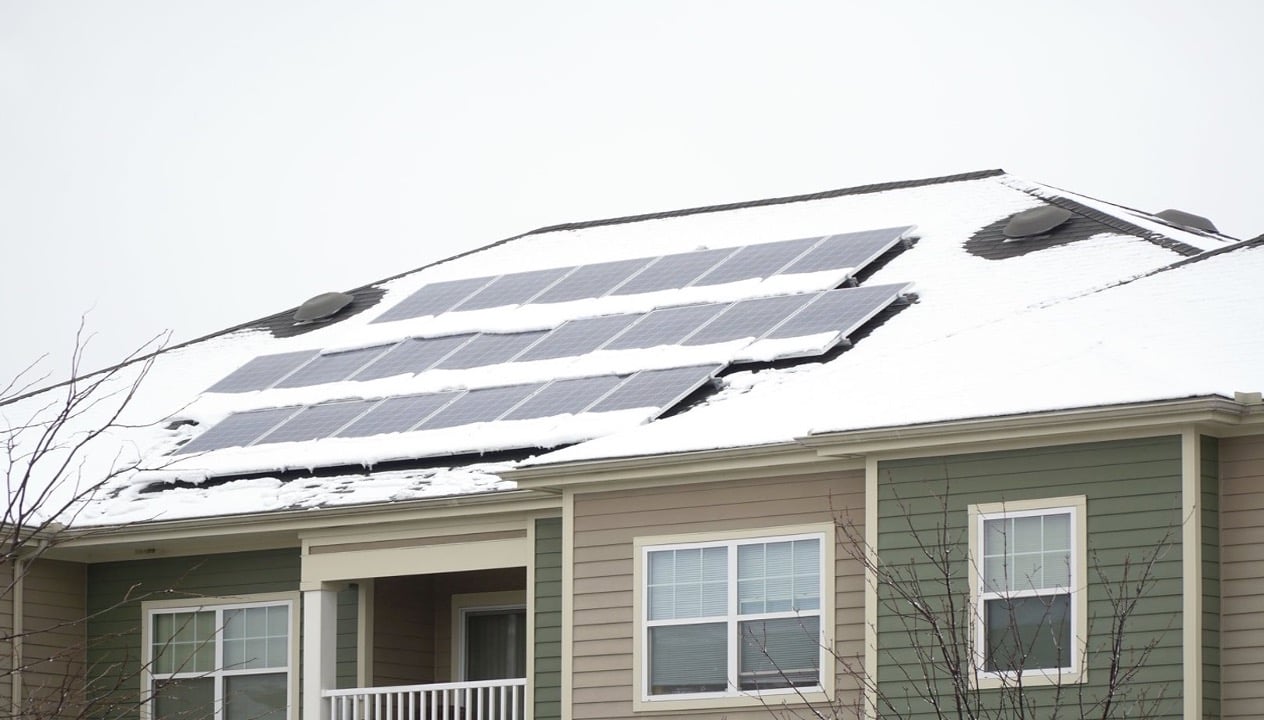 Snow may accumulate above and on the lower edge of PV modules.

To prevent a rooftop avalanche, you need a reliable system designed to hold the snow safely in place as it melts such as “unitized” (discontinuous) snow guards or a (continuous) snow fence.

How Do You Engineer a Reliable Snow Retention System?

The forces of snow on a rooftop can be mathematically calculated allowing you to properly engineer a snow retention system for any roof. Learn about "Metal Roof Design for Cold Climates" in the Metal Construction Association’s (MCA) White Paper, and watch this video to get an overview of how it works. Although a solar module has a slippery surface, in many cases snow won’t shed off it. This means you need to know the load your PV modules can handle. Be sure the module has a design-load rating equal to or greater than the roof design snow load. Module producers will publish loads for a given module in their product information. But be certain the published module loads you’re viewing have the appropriate factor of safety applied. Typically, this information is found within the module producer’s installation manuals along with the module’s appropriate mounting zones.

Although snow may accumulate on PV modules, the module frames are not designed to act as a snow retention system capable of resisting drag (vector) loads. This means the modules may not properly hold back the accumulating snow leading to a rooftop avalanche, and modules may be damaged by the vector force of the snow blanket.

When designing solar PV attachments to your roof in snow country, never stack components with an additional L-Foot. Double stacking forms a moment arm and creates a “prying” force, which could result in a failure of the racking system and roofing attachments when snow accumulates on the modules.

Where Do Snow Guards Go on a Roof With a Solar PV Array?

Because snow guards need to be placed at the eave where the snow blanket is densest, you may need to sacrifice some space to enable them to work efficiently. So locate your first row of modules further upslope. Creating a distance between the lower module row and the snow guard placement at the eave will give the snow a place to densify on the roof above the snow guard. 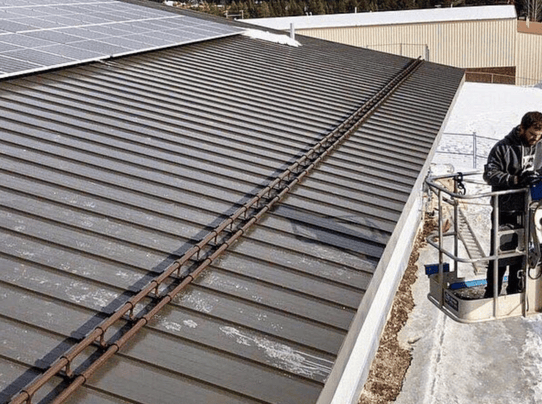 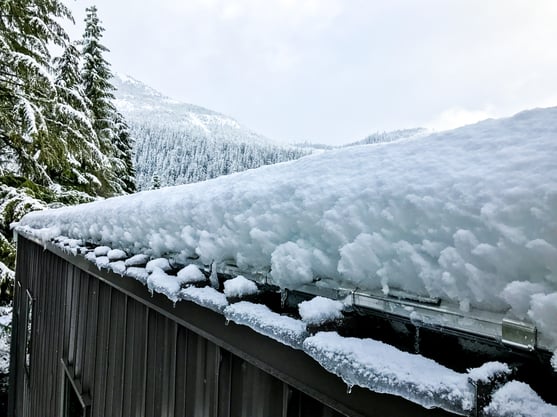 What About Tilted-racking Systems on a Low-slope Roof?

Tilted-racking systems require a space between each row of modules. The space prevents rows from casting shade on each other to maximize the modules’ energy output. But drifting snow and wind-driven snow can stack up in the space behind the titled modules, creating snowdrift loads greater than the roof design snow loads.

The space behind rows of modules also produces areas of “aerodynamic shade.” The sun doesn’t reach into these shaded areas to melt accumulating snow or ice. When the accumulations build up, they can also create heavier loads than the roof was designed to carry. The ASCE library offers recommendations on how to deal with aerodynamic shade and wind-driven snow in “Snow Loads on Solar Paneled Roofs.”

The space behind rows of modules produces areas of “aerodynamic shade.”

How Do You Make Sure You Have the Right System for Your Job?

Surprisingly, there are no codes or standards to govern the selection and proper engineering of your snow retention system, which makes it necessary to get credible information. You need testing by a third-party accredited laboratory to validate the system you choose can support the loads of any individual project. 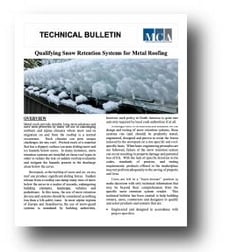 It’s critical the testing is specific to your actual roof profile, materials, thicknesses, substrates and load values, as different project factors yield different results. Look for published results that are readily available so you can verify proper testing was conducted. And double-check to be sure the published results include an appropriate factor of safety. This is the “allowable” load to be used in design. Many vendors only publish “ultimate” loads with no safety factory included. When your goal is to prevent thousands of pounds of snow from becoming a rooftop avalanche, having the factor of safety built-in is essential. To find out more about designing a reliable system, read the MCA Technical Bulletin "Qualifying Snow Retention Systems for Metal Roofing."

Understanding the factors at play with solar panels in snowy conditions allows you to protect both people and property, optimizing the service life of your metal roof and your solar PV installation.

Why do industry experts endorse S-5!? Because they know our rigorously researched, tested and quality engineered products deliver unprecedented value and innovative excellence. And all of our USA-made clamps and brackets are backed by an industry-leading limited lifetime manufacturer warranty