Photovoltaics (PV) is the process of converting light into electricity. PV technology converts sunlight (otherwise known as solar radiation) into direct current electricity. This process uses semiconductors, (the most common semiconductor material being crystalline silicon), so when the sun hits the PV, the electrons are released and form an electric current.

Photovoltaic technology is commonly attached to a panel; and these solar panels are connected to one another and mounted onto a frame. This PV assembly is called a module and you can wire these modules together into an array. Rays of sunlight (photons) are absorbed by the solar panels. This power then gets converted into Alternating Current (AC) to be used in the house - or sold back to the centralized city grid.

Rays of sunlight (photons) are absorbed by the solar panels. This power then gets converted into Alternating Current (AC) to be used in the house - or sold back to the centralized city grid.

The National Renewable Energy Lab (NREL) describes photovoltaic technology in the following terms: “Solar cells, also called photovoltaic (PV) cells by scientists, convert sunlight directly into electricity. PV gets its name from the process of converting light (photons) to electricity (voltage), which is called the PV effect. The PV effect was discovered in 1954, when scientists at Bell Telephone discovered that silicon (an element found in sand) created an electric charge when exposed to sunlight. Soon solar cells were being used to power space satellites and smaller items like calculators and watches.”

Solar cells electrically connected to one another are termed a photovoltaic module. When you wire a number of modules together, you create an array. The area of a module or array determines the amount of electricity that can be produced.

Word of the Week: Photovoltaic (PV)

PART OF SPEECH: Noun and Adjective

SENTENCE: // The advent of PV technology enables electricity production to transition from large centralized facilities to residential rooftops – allowing individuals to produce their own electricity and become prosumers. 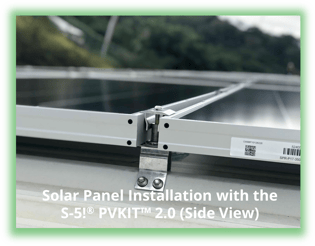 HISTORY OF PHOTOVOLTAIC: Photovoltaic comes from the Greek word – φως (fo̱s) – light. Voltaic comes from the inventor of the electrochemical battery – Alessandro Volta. PV arrays, also termed solar fixings, can be installed on rooftops, walls, as well as on the ground. Through rail less (direct mount) or rack and rail systems, solar panels can be installed providing at least a 30-year alternative power source.

VIDEO: Check Out the Features of the PVKIT® 2.0

Introducing the New and Improved PVKIT® 2.0