Rail vs. Rail-less: Which Is the Best Solar Mounting Platform for Your Roof? 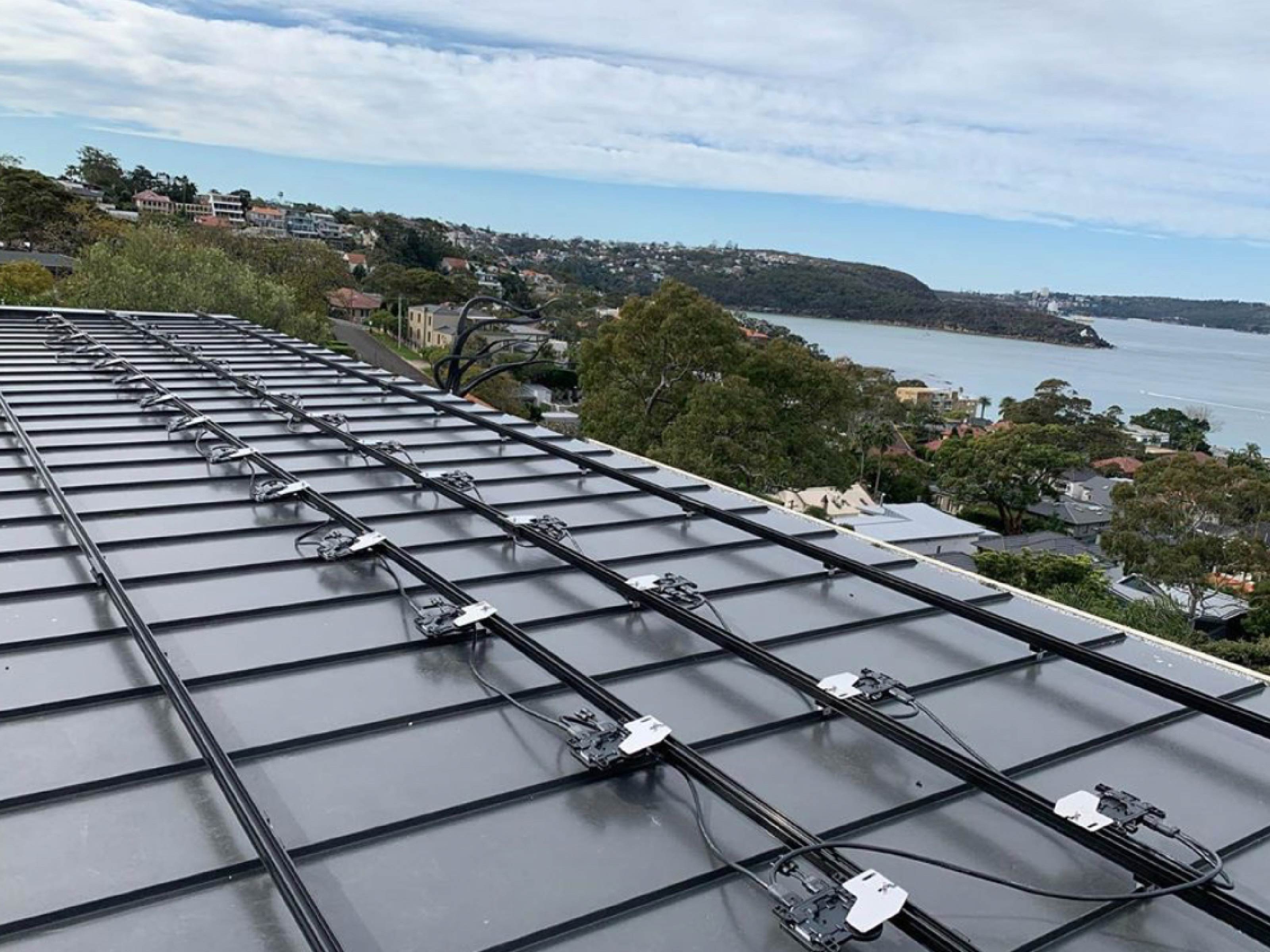 If you’re thinking of putting solar PV on your metal roof to generate renewable energy and save money over time, you’ve made a great choice. Metal roofs are an ideal platform for mounting solar modules thanks to their long service life and durability. Solar arrays have a service life of 35+ years, and metal roofing has a demonstrated service life of 60 years. Aside from metal, there are no other roof types that measure up to that without requiring replacement. Both standing seam and exposed-fastened metal roofs support solar arrays very effectively. 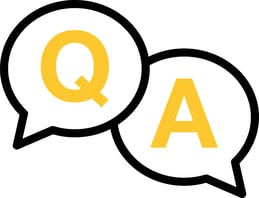 There are two main approaches to attach solar modules: one uses rails; the other is rail-less. For railed installations, metal rails are secured to the roof and solar modules are attached to the rails to hold them in place. Rail-less systems attach components directly to the roof to support the solar modules. Each has its own unique aspects.

Let’s look at some pros and cons regarding roof considerations, aspects of layout and cost.

A: Rail: Rails mount to standing seam metal roofs via non-penetrating clamps. EF has two options: brackets can attach to the roof panel’s rib only, or brackets may attach in the roof panel’s valley and into the structure when preferred.

A: Rail-less: Rail-less solutions use the roof’s structural seams or ribs as the rails. The seams on standing seam roofs become the rails. EF trapezoidal ribs or corrugations are also structural elements of the roof design and can be used as rails. This offers greater flexibility in module placement because they completely cover the roof from end to end on 6- to 12-inch spacings.

A: Rail: The weight of the system can make a difference. Clamps and rails are ~ 19 lbs./kilowatt peak (kWp). Most new metal roofs can support the weight.

A: Rail-less: Rail-less is <3 lbs./kWp, which equates to approximately 85% lower added dead load. Lower added load is extremely helpful as an existing building may not have been designed to carry much additional weight. Rail-less also offers 25% better load distribution onto the roof and into the structure. 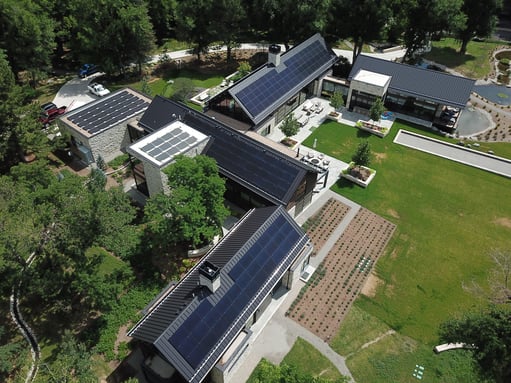 A: Rail: Rails will likely need to be field-cut to work around obstructions and architectural elements.

A: Rail-less: Rail-less solutions easily adjust to avoid obstacles and can be used in smaller areas where cutting rails to fit properly is time-consuming and unsightly.

A: Rail: Rails are laid out across the ribs or seams (East-West), resulting in a portrait module orientation – 90 degrees to the rails. 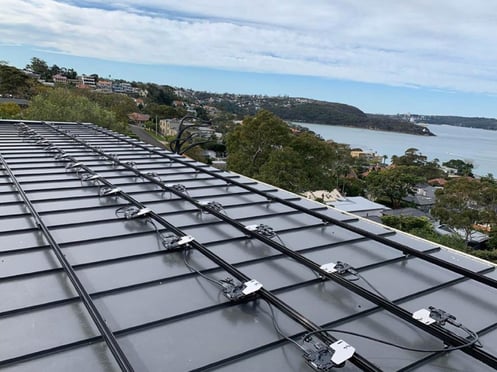 A: Rail-less: Because standing seams or exposed-fastened ribs are the rails and run in a North-South direction, modules are installed in landscape orientation – still 90 degrees to the roof’s inherent “rails.” 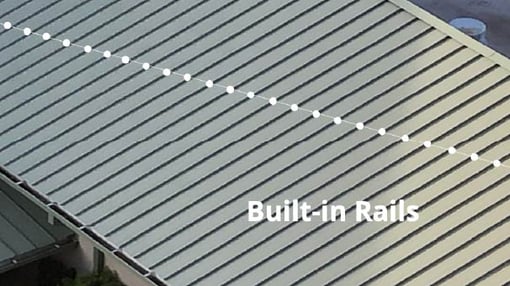 The standing seams or exposed-fastened ribs of a metal roof offer built-in rails for the attachment of solar modules.

While we’re on the topic of laying out your solar PV array, planning wire management is also an important issue. Check out our latest video on Best Wire Management Practices in Railed and Rail-less Solar PV.

A: Rail: If you have a relatively flat roof and want to tilt the array to capture the sun’s best angle, tilting is possible.

A: Rail-less: Tilting is not possible. 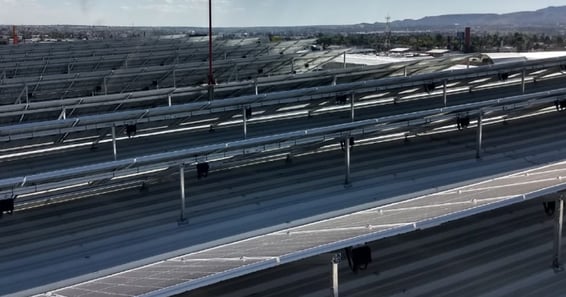 Tell us about your project and we'll guide you to the best fit product for your specific roof panel.

A: Rail: Rails and components require time for layout, assembly, labor and installation.

A: Rail-less: Pre-assembled rail-less systems require only about 90 seconds per module to install once you get the hang of it.

A: Rail-less: State-of-the-art, rail-less systems can consist of no more than three components and save up to 35% or more on material costs.

A: Rail: Rail systems require heavy components – and many more of them than rail-less. Using the example of a 50-kilowatt (kW) system, rail mounting would clock in at about 970 pounds, which means you pay the weight-calculated commercial freight charges.

A: Rail-less: Fewer materials and much lighter components average 149 pounds for the same 50 kW system as above—15% the weight of rail mounting.

Rail and rail-less solar PV array mounting solutions each have their pros and cons. Today, we covered just a few ideas on roof considerations, aspects of layout and cost to give you an idea of the differences.

No matter which attachment method you choose, we have proven solutions to meet your needs.

If you have specific questions, we’re always here to help. Simply comment below or contact us at support@s-5.com.

Why do industry experts endorse S-5!? Because they know our rigorously researched, tested and quality engineered products deliver unprecedented value and innovative excellence. And all of our USA-made clamps and brackets are backed by an industry-leading limited lifetime manufacturer warranty