What is a Rooftop Avalanche? [video]

It is a sudden release of snow off a rooftop. Falling snow forms a temperature-sensitive bond to the surface of a metal roof. As that roof is warmed, (through sun or building heat loss), the bond with the snow is broken and a thin film of melt water lubricates the roof. This sudden release from a rooftop can dump many tons of snow below the eaves in a matter of seconds, endangering building elements, landscape, vehicles and pedestrians. 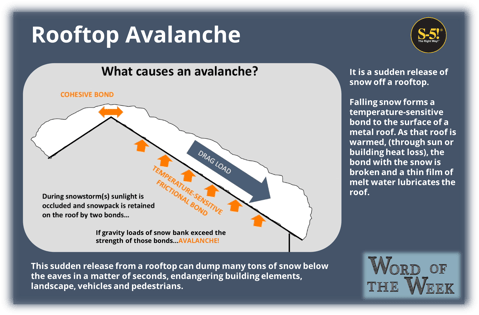 Qualifying Snow Retention Systems for Metal Roofing, from the Metal Construction Association discusses the rooftop avalanche in the following terms:

Metal roofs provide durable, long-term solutions and have been preferred by many for use in challenging northern and alpine climates where snow and its migration on and from the rooftop is a normal occurrence. Such climates can pose unique challenges for any roof. Pitched roofs of a material that has a slippery surface can pose sliding snow and ice hazards below eaves. In many instances, snow retention systems are installed on these roof types in order to reduce the risk of sudden rooftop avalanche and mitigate the hazards present in the discharge areas below the eaves.

Word of the Week: Rooftop Avalanche

SENTENCE: // A snow guard increases friction between the roof and snow, which retains snow pack on the roof, so that it evacuates in a predictable and controlled fashion rather than by a sudden and dangerous rooftop avalanche. THE SCIENCE BEHIND A ROOFTOP AVALANCHE: But merely placing snow brakes over doorways or walkways will not save you from an unpredictable rooftop avalanche. It is very difficult to predict how snow banks will shear when only a portion of the bank is restrained. It will not, however, shear in a straight line from end of the snow retention system (also known as a snow guard) up to the ridge. Rather, it will shear in a diagonal line toward the ridge. The angle of that line becomes more acute as the slope of the metal roof increases, resulting in a large, wedge-shaped bank of snow being supported by the system - not a small, rectangular shaped bank. This is because the snow bank has cohesive strength within itself. The cohesive strength varies with the density and temperature of the snow bank, which always changes. Hence, the angle of shear is impossible to determine with any certainty.

How to Mitigate a Rooftop Avalanche:

VIDEO: Why Use Snow Retention?

There Aren’t Any Snow Guard Police: What’s On Your Metal Roof?