What is COR-TEN® (aka Corten, CorTen)? 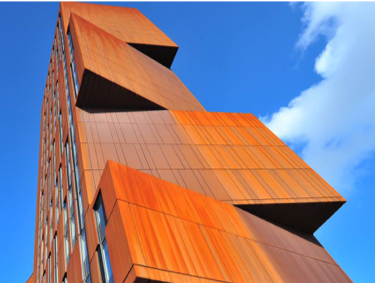 COR-TEN® is a special steel alloy that has a weathered, rusty-orange look. The material, also referred to as corten or CorTen, was developed to eliminate the need for painting the metal. Cor-Ten forms a stable rust-like appearance after being exposed several years to weather.

U.S. Steel owns the trademark on Cor-Ten. This steel alloy is encouraged to rust – and form a dark brown oxidation. This rust forms a protective coating over the surface that slows further corrosion.

Word of the Week: COR-TEN®

Corten (sometimes called “bleeding steel”) has now become a more generalized term and can include products manufactured by other mills but have slightly varied alloy ratios. A critical aspect when installing corten is that it must be well-drained. When moisture is retained in joints or laps, it can lead to early corrosion.

The U.S. Steel Corporation began manufacturing this corrosion-controlled steel in 1933, and it was predominately used for traffic poles, structural beams, columns, and railroad cars. Today, you can find this material used on corrugated roofs and standing seam profiles. The word corten refers to the two distinguishing properties of the steel: (COR) corrosion resistance and (TEN) tensile strength. Learn more about our metal roof clamp compatibility with Cor-Ten steel!

How the Corten Patina Develops:

Weathering steels are alloyed with a small amount of copper, chrome, and nickel. These metals develop dense and tight oxides that act as a sort of “seal” across the surface of the steel.

This layer protects the steel from corrosion. During this oxide development process, weathering steels leach red-colored oxides – to form the rusty patina. But this leaching can stain adjoining sidewalks, walls, etc.

Omni Coliseum – Atlanta, 1972 – holes formed in the structure due to the humid Atlanta climate – which began to weaken the structure. It was demolished after 25 years.

Aloha Stadium – Hawaii, 1975 – never stopped rusting due to the salt-laden ocean chlorides of the island.

The above examples illustrate the importance of proper drainage design so excess water does not collect and then fall onto the concrete or adjoining structures – staining them.

FAQ: What About Clamp and Bracket Compatibility with Corten?

Word of the Week: What is a Corrugated Metal Roofing Panel?

Word of the Week: What is a Standing Seam Metal Roof?

Word of the Week: What are the Parts of a Metal Roof?